I am always on the lookout for a good service project and I have recently fallen in love with gleaning. Gleaning is taking good that would otherwise go to waste and collecting it for the poor and needy. It is one of the oldest forms of charity.  It was actually required of farmers to leave part of the harvest for gleaners in the ancient world.

Gleaning helps feed people in need and reduces food waste.  You can do it with your kids and it gives you a chance to work in the dirt, which I find very therapeutic.  Plus, it is easy to do on the weekends.

In San Diego, I have been volunteering with Produce Good.  Here is their web site:

https://producegood.org/
Posted by Joshua Johanson at 7:57 PM No comments:

https://www.eweek.com/big-data-and-analytics/five-mistakes-companies-make-with-machine-learningExactly! I wish people understood that machine learning isn't just plug-and-play. You have to understand what it can learn and what it can't. Some tools work better with some problems. Others work better with other problems. It is a toolset and you need to know when to use which tool and in what circumstances.
Posted by Joshua Johanson at 7:16 PM No comments:

What is good English?

It is hard to pin down exactly what constitutes good English. The English of today is different than what it was a hundred years ago, or even ten years ago. Even talking to my grandma, I find that there are differences between the way I communicate and the way she communicates.

So how did these changes take place? Did a committee get together and decide to make changes? No. Language changes through the way that each one of us uses it. Language truly is a democratic concept. It is only defined through the voice of a community of people.

So if language is simply the compilation of the way it is used, how do you define what is good and what is bad? At one time, "dived" was the grammatically correct way to conjugate "dive" in the past tense. People who used "dove" were ungrammatical, and branded as ignorant. However, as "dove" gained popularity, it somehow passed some magic threshold and became grammatically correct. At that moment, the ignorant people who used "dove" ceased to become ignorant, and became good speakers of English.

How do we determine the magic threshold? Much of it depends on who is using it. For example, English has ALWAYS ended sentences in prepositions. "From whence comest thou?" has always sounded stilted and odd. However, in the Middle Ages, some "smart" people decided that Latin had a better grammar structure than English. Even the most illiterate Spanish speaker will say "De donde eres", or "Of where you are". So they decided since Latin was better, then wanted to implement this into English.

Still, on the books, that is the correct way to speak. Even though every English speaker will say "Where are you from?" it is technically bad English, because some "smart" people in the Middle Ages decided it was so.

However, if some people we as a society like to down on start speaking a certain way, we consider it bad grammar. For example, many African-American dialects have a very sophisticated use of the verb "to be". The sentence "This chili be hot" has a completely different meaning than "This chili is hot." The habitual be, as used in the first sentence, indicates a more permanent condition, meaning that the chili is always hot. More than likely, it means the chili is spicy hot. However, the second be, which is conjugated as is means that the chili is hot right now, and isn't necessarily always hot. More than likely, it means the chili has a hot temperature right now, which may change in the future.

So why would clumsy construction proposed by elitists in the Middle Ages be preferred over rich linguistic constructions of modern speakers? My guess - linguistic snobbery. Grammar is good for clarity, but sometimes it is often used to create separate classes, and put one people above another people. Italian is a perfect example of this. Venice was a center of the Renaissance, and established their language is the preferred Italian dialect. Now, every bum in Venice speaks perfect Italian, while even the most educated Sicilian struggles with their grammar.

So maybe we should be a bit more pluralistic in our approach of grammar. Identifying one social group that we prefer over another serves to divide and classify people.

In this modern age, where almost anyone can publish anything in any grammar they want, computational linguistics is already learning to parse English the way it is written, and not necessarily the way it is supposed to be written. Grammar is important for clarity, but it is also important for identity.
Posted by Joshua Johanson at 11:21 AM 1 comment:

Email ThisBlogThis!Share to TwitterShare to FacebookShare to Pinterest
Labels: linguistics

On July 5th, a massive fire destroyed half of Merritt Trace Elementary, where a friend of mine works. They lost 16 classrooms, 4 resource rooms, a mobile computer classroom (30 laptops), and the school library. It has been a devastating event for all those involved, and my friend and her fellow co-workers are desperately trying to rebuild their school.

They found a way they think they can get $500,000 for the school. Kohl's is giving $500,000 to 20 schools in a few months. The schools are being chosen through voting on Facebook. Currently, Merritt is number 24 in the nation. With just a few more votes, they could easily get into the top 20. It would be simple to help. Just do the following:
- go to http://apps.facebook.com/KohlsCares/school/147361/merritt-trace-elementary
- "Like" Kohl's,
- use 5 of your votes for Merritt Trace Elementary in SJUSD,
- and, if you're feeling really generous, pass this along to your friends.

That's it! If the link I've included doesn't work, please take an extra minute to find the Kohl's Cares application and vote for Merritt Trace Elementary in San Jose, CA.

Thanks everyone!
Posted by Joshua Johanson at 9:23 AM No comments:

I remember when I bought my first pair of running shoes. The clerk in the store let me run with a couple pairs outside the store to see how they would fit while I run. It was a dream. I ran so much lighter and freer than I ever have before. From that day, I fell in love with those shoes. I have taken with them to run across the Rockies, along California's shores, through the Redwood forest, along the Provo river, through mud, rain, and tears. I have had several pair of runnning shoes since then, and I never thought I could love a pair of shoes more than those.

However, that day might have come! I have been recently introduced to the world of bare foot running! Last week I ran almost 6 miles with nothing on my feet. No shoe compares with the millenium of evolution that has crafted our feet into the ultimate running machine.

Now you might ask, this is all great and dandy, but feet aren't a type of shoe. Well, the problem with barefoot is that you need to be careful about not pucturing your foot. The places I love to run is usually out in nature and will have things to mame your foot. Plus, thousands of years ago, the ancient man didn't have to worry about broken glass. Then I discovered this: 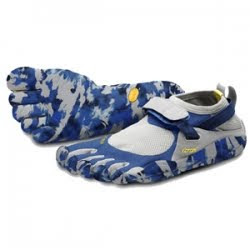 It is the barefoot shoe. It is the merger of modern technology with nature's wisdom. This shoe let's my foot move in its natural way, while the rubber protects my sensitive modern foot from foreign objects. I think I am in love all over again.
Posted by Joshua Johanson at 8:49 AM 2 comments: